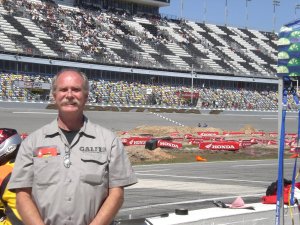 Well,as promised in the last post, this one will be all about AMA Racing at Daytona. After some really great racing the weekend before, Moto-ST, CCS and ASRA followed by very exciting vintage racing, AHRMA, the first days of the week…it was amazing to watch and hear some of these really, really old bikes go around the banking. One thing I have to add here is the heroic effort Nate Kern (www.natekern.com) and the BMW of Atlanta team did to get Nate running in the Moto-ST 300KM race. While I was at Galfer Brake Company, I had the pleasure of getting Nate set up with some really great brakes and meeting the guys at Daytona was a real pleasure. Anyway, Nate’s bike got tossed in practice, pretty badly too. Fortunately, Nate was also there to spend a day teaching with the Team Hammer School and he brought his personal school bike, another BMW R1200RS, but it’s a completely street legal sled!! Mirrors / blinkers and all!! Less then 24 hours later it’s a full blown race bike!! Nate ended up finishing third in the Moto-ST 300. Next for Nate it’s onto a full Factory BMW Race bike for the 200..

After all that, the AMA Roadracing and Supercross Circus rolls into town. Wednesday is set up and some practice time. The 200 is the only long distance race on the AMA schedule so the teams need to practice the pit stops, fun to watch. BMW Motorrad showed up with the Factory Endurance team. German precision at it’s finest.

Thursday at Daytona was a good day for racing..qualifying for the 200 and Superbike and the Superstock and Supersport races..you can read the results at AMA Superbike.com I got a chance to see a little bit of it..work, work, work..the dogs life of a sales rep!

But the real highlight of my day was a chance to spend about 15 minutes with Earl Hayden, yep, that Earl Hayden.

I had met Mr. Hayden a couple of times before but just briefly. This time I got to have a good conversation with him. We talked about Nicky and the struggles he has been having developing the 800..I probably shouldn’t be saying this but, Earl is not all that happy with Honda. Nicky wasn’t getting what he needed until halfway through last season and he feels that they are already a bit behind the curve as they get ready for this season. Side note here, Nicky’s teammate Dani Pedrosa has won a race this season but we’re talking about Nicky. We also talked about Tommy and finally starting a season healthy and it shows. Watching him at Daytona and him finishing on the podium last weekend at Barber, this is going to be a good season for the eldest Hayden Brother. I gotta tella you, Earl Hayden is one of the most interesting people I have met in all my years of racing and the motorcycle biz.

Friday..check this out…we’re under Tornado watch!!?? the rain is unbelievable (just look at the picture..sheets of water off the Market Area. There are rumors of canceling the SuperCross scheduled for that night. I didn’t get a chance to watch any of the practice, but I could hear it every now and again. This afternoon I got a really fun interview with former Speed TV commentator Brian Drebber at the Corona Light Honda pit..you can listen to it on the podcast. It was raining so hard you could hardly see!..

Anyway, they held the Supercross Torrential downpour and all. I was lucky enough to have a nice dry VIP suite to hang out in and watch the race. Our friends at Primedia….Motorcyclist, Dirt Rider etc set us up sweet… beer, good food and a lot of friends.

The Supercross racers are unbelievable!! The strength it took to ride in those conditions! Over the doubles into axle deep mudholes…They are truly my new heroes..if the bike would stall and not restart..they would just leave the bike there, standing upright in the mud and walk away. The end of the race was pretty amazing, Chad Reed had a substantial lead over Kevin Windham and then disaster struck. Three corners from the end in a horrendous mud bog Chad’s bike stalled and would not start again..Chad stood there in the mud and watched his victory disappear with Kevin Windham.

After the race it was off to a local dive for more beer and hangin’ with friends..tomorrow, back to road racing.

Ride safe, ride fast..I’ll see you on the road..
Paul

Ok, more about Daytona Bike week…it really was quite an experience. As the week plus worn on, more and more bikes were in town. Like I said before, our hotel was right on Speedway Blvd. this is the main road through / into town and right past the Speedway itself ( hence the name ) so there was a constant flow of bikes. One thing about Florida, no helmet law. I was really surprised to see how many riders went topless..no helmet. Sportbikes, cruisers, dual sport..it didn’t matter. No brain buckets, which in my mind means no brains period. Thats just me. Anyway, our hotel parking lot was full of bikes, from a really cool old Sachs 250 two stroke to one of the coolest Trikes I have ever seen. 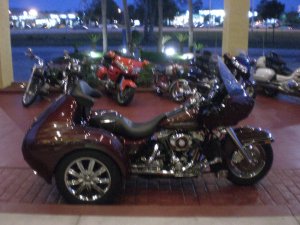 Sunday at Daytona was quiet by all reports..hangovers from Saturday night? But, the racing was great. The Moto-ST races were on. BMW, Ducati, Suzuki, Honda, Kawasaki, Aprilia, Guzzi…all there and flying. I did get a chance to break away from the Galfer booth to check out some of the racing. The 300KM was great to watch. Last year a good friend of mine Angie Loy, http://www.ponyrific.com, was teamed up with Jay Springsteen and Jimmy Felice for the Moto-ST Endurance race and absolutely loved it and those guys. This year was Jimmy and Jay racing the Kawasaki 650 Ninja. I remember watching these guys as dirt trackers and Jimmy Felice as a great 250cc roadracer, seeing them together is a real treat. Through out the whole race they were battling back and forth for first place in their class. After 300KM they won out..I got a chance to meet Jimmy Felice later that evening at the recording of the Chris Carter Radio Program. Jimmy was a very cool guy..girlfriend a bit ditzy though..

The Chris Carter Radio Show. A Daytona Bike Week institution. This man comes over from Britain every year to do race announcing and record his radio show which is broadcast locally there in Daytona and now over the internet, http://www.wndb.com It’s really amazing, everybody comes to be interviewed by Mr. Carter. One evening was the Hayden brothers, the Bostrom brothers..another evening was Kevin Schwantz, Scott Russell..it just went on and on..My young friend Aaron got into it as well. Each evening we would leave the racetrack, head over to the Marriot and sit in on the recording. Great fun. Our first time there we met a young lady, Danielle who works for Street and Comp accessories http://www.streetandcomp.com , and just loves roadracing and roadracers. She collects autographs in all the magazines and…well, look at the picture. She really is a fun lady and track day junkie.

Well, thats it for today. Tomorrow it’s all about racing.

Ride Safe, Ride Fast and I’ll see you on the road.

If you have never been to Daytona Bike Week, you need to go. If only once. It’s quite an experience. So how did I end up there this year you ask?? My day job, sales rep for Galfer Performance Brakes, sent me. Two weeks. More work time than fun time but the fun time more than made up for the work time. We see the racing on TV and a little bit of the scene, well let me tell you, ‘The Scene’ IS the show.

My friend Aaron and I arrived in Orlando on Wednesday night about three hours late, airline travel in 2008, you’d think it would get better instead of worse… AND it was a balmy 35 degrees !!?? I’m in a T-Shirt!? not smart on my part..I was told before I left home to take some more warm clothes..did I listen? uh, no. Gourmet dinner at the McDonalds next to the hotel… business travel is so glamorous. Thursday dawns bright and beautiful and still too cold for Florida as far as I’m concerned. After renting a high style U-haul van Aaron and I head off to Winter Garden Florida to the legendary ‘Custom Sportbike Concepts’ and my friend Nick. If you guys are into customizing sportbikes, this is the man to talk to. Check out any issue of Two Wheel Tuner Magazine and there you will find more of his creations than just about anybody elses. Very cool stuff. Check out his website http://www.customsportbikeconcepts.com NIck was good enough to let us ship all our products to his shop for Bike week. After a good visit it’s on to Daytona Beach.

Our hotel is right on Speedway Blvd. pretty cool. We’re there a couple of days early so we can get set up so not a lot of bikes cruising around quite yet. Because it’s club racing, the first part of Bike ‘Week’ is pretty quiet..good racing though. The Moto-ST series is very cool..all Twin Cylinder bikes..and based on horsepower, not so much on displacement. Pretty cool seeing built to the hilt Suzuki SV650’s..racing and beating bigger bikes. Now, I have to say..watching motorcycles go around the banking for the first time is truly awe inspiring. I have a couple of friends who have raced there, I envied them then, now I really admire them…and I still really envy them !!

After a couple of somewhat quiet nights Aaron and I decide it’s time to hit the main drag, the BIG SHOW..main street

I called my son from there and just held up my phone so he could here the cacophony..big word for a lot of Harley noise!!! You can barely walk down the sidewalk. Nine Gazillion people and bikes parked on the sidewalk. Main Street is closed off to cars for a full week..bikes only. And I gotta tell you.. a lot of very cool motorcycles. Yeah, mostly Harleys, but a few really interseting bikes. From a very unique Honda 350 to a couple of old Vespa’s, a beautiful 83 Suzuki GS1100..the list goes on. My young friend Aaron was truly in awe and having a great time..check out his smile !!

It litterally took us 2 hours to walk a few blocks there were so many people and bikes but it was very cool and fun..however..we only got flashed twice..Aaron was so disappointed. After one good tour of the scene, we decided it was time for dinner..however this time something a little more upscale than McDonalds…Wing House here we come….chicken and cold beer..what better eh??

Sunday a full day of racing…but thats in the next post….
Ride safe, ride fast..but most of all, go riding…